Sarah Mildred Toyn was born on January 29, 1912 in Grouse Creek, Box Elder, Utah. Mildred was the fourth and last of the children born to Charles Crawford and Ellen Kimber Toyn. She was named Sarah after Ellen’s mother, Sarah Elizabeth Morgan Kimber. The other children were Alfred Charles, Cora “E” and Archie Leo. 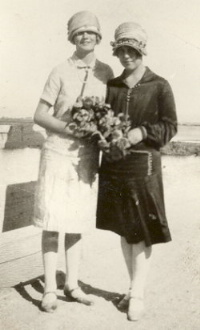 Mildred was a beautiful child with lots of dark brown curly hair. She also had a happy pleasant disposition and had many friends. She spent her early life in Grouse Creek, where the family had built a new, very nice five room house, and bath and pantry, on their farm.

When she was about two years old, she and her five-year-old brother, Archie, were playing when Ellen heard Archie say, “Now turn around.” Ellen went to investigate. There sat Mildred on a chair, Archie, with scissors in hand stood beside her. The dark curls of hair surrounded the chair. The beautiful hair was gone, streaks of blood could be seen in the hair that was left, showing where the scissors had scratched or cut her head. Her mother had to finish trimming the hair cut.

She attended grade school in the three room school at Grouse Creek, where they had ten grades. She rode the “Bander” as the bus was called, three miles each way morning and afternoon.

One winter when she was in the second or third grade Mildred went to school in Tremonton, Utah where her family spent one year.

As Mildred got older, she was very interested in music, some piano, but mostly voice lessons. She eventually went to Ogden, Utah, where she boarded with her Uncle Charles William and Aunt Malinda Jones Kimber. There she took voice lessons. Mildred had a very pleasing voice and was asked to sing often. She was also a very capable piano player, playing mostly by ear, however.

In 1916, the family bought a Model T Ford. In July they decided to make a trip to Portland, Oregon to visit Charles’ brother, Thomas A. Toyn and wife Marie. There were no oiled highways then, just plain dirt roads in most places, but the trip was made safely. The family camped out each night. While there, the group of us went to Sea Side, Oregon and spent a week, renting tents with wooden floors and sides. We all had a very good time on the beach and playing in the ocean. We returned home safely after a memorable trip.

Shortly after returning home, Charles received a call to fill a two-year mission in Australia. Plans were completed and he left in December 1916. After completing an honorable mission, he returned home December 1918 in time for Christmas.

Mildred married Cecil W. Ballingham on May 20, 1931, in Ogden, Utah. Cecil worked for the railroad so they lived in several different places—Grouse Creek, Utah, Lucin, Utah, Laray, Nevada, finally settling down in Sparks, Nevada where they bought a home.

Cecil was the son of Charles and Anna Newman Ballingham. Cecil and Mildred had two children, a son, Cecil Boyd and  a daughter, Sharon, both born in Ogden. They were each married  and Mildred and Cecil obtained five grandchildren, Leslie, Doug, Debbie, Lisa and Dwaine. They in turn brought four great grandchildren, Sarah, Steffanie, Sherolyn and Jay.

After moving to Sparks, where church facilities were available, Mildred was very active in the LDS Church, especially in the Relief Society. She was President, Counselor and Secretary.

Mildred had a special gift of compassion. She helped many families, small children and new babies, tending, caring, cooking, cleaning, washing, and ironing. She was like a Mom to everyone.

She had many hobbies. She quilted, embroidered, crocheted, and made beautiful monogrammed pillow cases. She helped with the Country Fair, bazaars and fund raising dinners.

Her employment was at the Silver Dollar Signs. She was so pleasant and patient it was a pleasure for the other employees to be around her.