His family immigrated to Grouse Creek, Utah, arriving in the United States on May 30, 1898. George was four years old when the family joined the Church of Jesus Christ of Latter-day Saints in England. The missionary that had a great deal to do with their conversion was William C. Betteridge of Grouse Creek, Utah.

Sam Kimball met them when they first came to Utah and took them to his home in Grouse Creek where the family stayed. William worked for Sam until they could find another place to live and then they moved to the upper Thomas ranch. 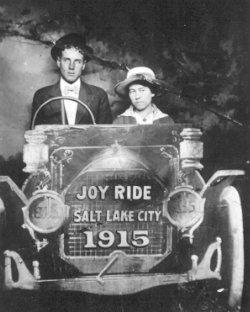 George and Clara had two sons, Ronald and Olene. Clara Ann developed a brain tumor and
died on September 21, 1934.

He then married Louise Barlow, daughter of Jesse and Annie Paskett Barlow, in the Salt Lake Temple on May 29, 1935. They had three children, daughter, Rosalie, and twin sons, Wilber and Warren.

George was a teacher in several different organizations. He was the superintendent of the Sunday School, Mutual and he ran the picture show when it first started. He had a lot to do with the July 4th Celebrations. He would go to Burley, Idaho the night before and buy the ice cream and pop and sandwich meat and spend all night bringing home the items.

When he was the superintendent of the Mutual or Sunday School, he would spend all day selling food and work all day long to earn money for the different organization. 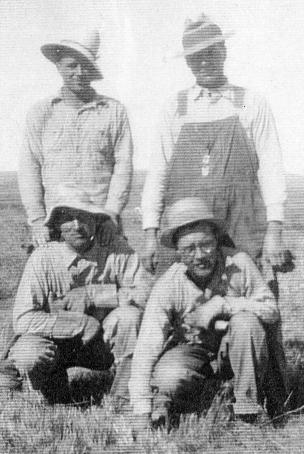 He loved to play the harmonica and at one time he belonged to the Grouse Creek band. He played for the old time dances at Grouse Creek. Also, he had a very good tenor voice.

George was a mail carrier for the mail between Lucin and Grouse Creek for a number of years. He has lived in Grouse Creek, Burley, Idaho, Sparks, Nevada and Sun Valley, Nevada. He worked for the Southern Pacific Railroad as a power house operator in Palisade, Nevada.

George was of medium build and had broad shoulders because he had worked so hard. He had built muscles this way. He had a very good sense of humor and made everyone around him feel happy and glad. He was always talking and laughing.

George died on March 5, 1961 in Winnemucca, Nevada in a motel he was staying at as he was a traveling motor car mechanic for the Southern Pacific Railroad. He is buried in the Grouse Creek Cemetery.